To us, waste is a valuable resource, which is why our waste management solutions are geared toward sustainability, efficiency and maximum resource recovery.

Operating for over 25 years with 10,000 skip bins in circulation, we have seen our fair share of weird and wonderful things left in skip bins.

Ever wondered what the most bizarre items to have been found in skip bins are? We’ve compiled a list of the most extraordinary items from around the world. 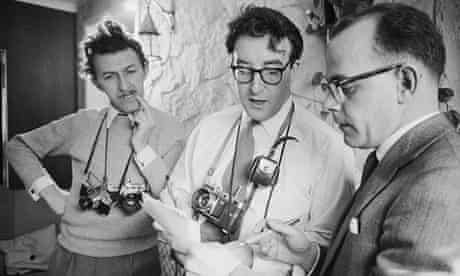 Two long-lost films starring Peter Sellers have recently been aired for the first time at the Southend Film Festival. The two comedy shorts, ‘Dearth of a Salesman’ and ‘Insomnia is Good For You’ were made by the actor in 1957 and are each 30 minutes long.

Originally shot at the Park Lane Films studio, the films were found dumped outside the building when the company closed down. Former Facilities Manager, Robert Farrow recalls, “I spotted 21 film cans in a skip outside the office block and thought they would be good for storing my Super 8 collection in. I took them home, put them in a cupboard and pretty much forgot about them.”

During a recent clear-out, Farrow found them again and decided to open the cans. To his amazement, he discovered the two Sellers films. He contacted the organiser of the Southend Film Festival, Paul Cotgrove who was thrilled to uncover the mystery of the ‘lost’ Peter Sellers films. “Robert’s find is the Dead Sea Scrolls of the film world,” he enthused.

As they say, one man’s trash is another man’s treasure. A fine example of this occurred recently in Ireland where two homeowners recovered two vintage fireplaces from a skip.

Colm Doyle and Peter O’Reilly had bought two old adjacent townhouses and were undertaking a huge renovation project, “inspired by the idea of breathing life into an old building.” With a desire to create a space that was a fusion between modern and traditional, the couple were keen to restore the property with period features – and the fireplaces proved the perfect nod to the property’s origin.

In 2011, a 120-year-old Welsh Bible was discovered in a skip following a house clearance in Dorset, UK.

The bible is said to contain some beautiful illustrations, as well as children’s drawings and logs dating back to 1901. Custodian David Green is on a mission to reunite the bible with the family whose history it belongs to. 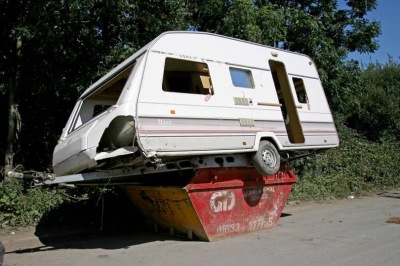 Tyrone Covell, a UK waste collector, went to collect a skip and was astonished to find a whole caravan dumped on top of it!

Melissa Hodges, of hire firm GD Environmental, said, “[Tyrone] couldn’t stop laughing. He phoned the office to tell us about it but he couldn’t speak because he was laughing too hard.”

Last year, builders unearthed human bones from a skip in Bristol, UK. The bones are believed to have come from an ancient cemetery which is thought to have been located at the construction site on All Saints Lane.

A homeless Russian man, Evgeny Khodyrev, was hailed a hero last October, having rescued a newborn baby girl from a skip bin. The man was rifling through rubbish in the town of Nizhnekamsk when he heard what he described as a faint ‘groaning’ noise.

He initially thought it was a kitten or puppy, but then discovered it to be a 5lb baby girl. The baby had reportedly been dumped in the skip in temperatures of minus 2c, approximately three hours earlier by its’ mother, shortly after birth.

Khodyrev immediately called the police and ambulance service and wrapped the baby in his coat to keep her warm. He later delivered a baby blanket to the hospital as a gift for the baby girl he saved.

In 2016, a bomb disposal unit was deployed to a skip hire firm in Manchester, UK, after a grenade was found by a worker who was sifting through waste material at Salford Waste Management. The area was evacuated and a cordon set up by police.

Tragically, dogs and cats dumped in rubbish bins are an all too common an occurrence. Fortunately, however, thanks to kind-hearted locals, many of these stories have a happy-ending.

The Cat Haven have reported multiple stories about cats being rescued from skips and rubbish bins, including one stray who was brought to the Shenton Park shelter, having been found with a tin can stuck over its’ head. The poor cat was so desperate for food it was scavenging in the skip bin for food and got its’ head stuck inside a tin can.

Luckily, a vet at the shelter sedated the cat, removed the tin and the cat was given some well-needed nourishment. 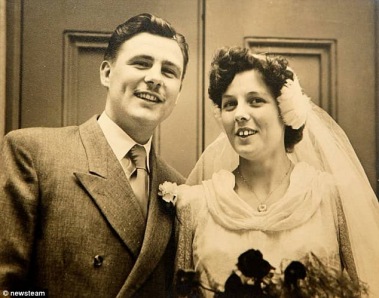 In 2013, a delighted couple were reunited with the wedding album they lost 61 years ago, after it was discovered in a skip.

Patrick Roach and his wife, Jane, were married in Birmingham, UK, in 1952. Just weeks after their wedding, however, they were heartbroken to discover their precious wedding album was missing. And when they later moved to a new home 60 miles away, the couple assumed they would never see the treasured photographs again.

Yet unbeknownst to them, local builder, Tom Bradley, saved their album from a skip outside their former Birmingham residence and vowed to return it to its’ rightful owners.

Bradley was unable to track down the owners and when he died in 2013, his daughter, Tina, took up the mission. She sent a selection of the black-and-white photographs to a local paper, where they were recognised by relatives of the couple.

Having been reunited with the album, Patrick Roach commented, “It brought a tear to my eye…. We are very touched that two strangers… went to so much effort.”

At Instant Waste Management, we have come across all sorts of interesting items left in our skip bins, but perhaps the most frustrating story lies in the tale of a married couple from a few years ago.

One half of a married couple was having a good clear-out and threw out some bags found under the bed. Her husband was horrified to later discover that the bags she had disposed of were full of cash.

Unfortunately, by the time the mishap was discovered, it was too late; the waste had been cleared and was long gone.

If you’d like to hire a skip, use our super-easy online booking system, or contact us today for more information.